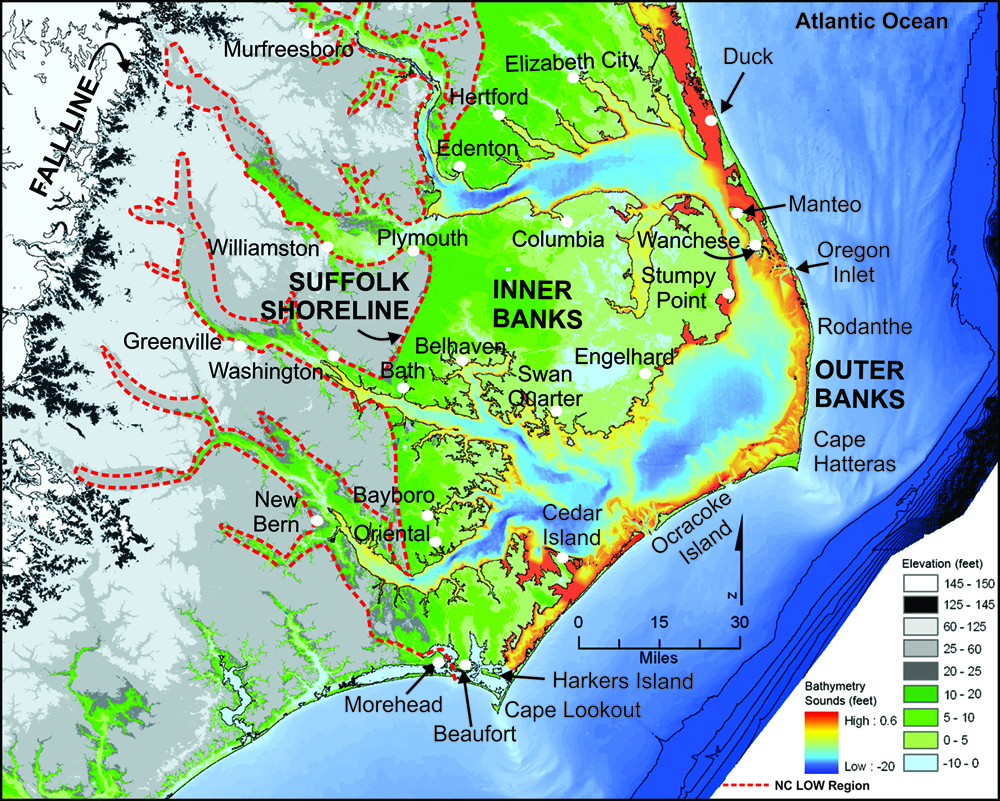 FIGURE 1. This is a colored topographic map of the NC LOW coastal system which is outlined by, and east of, the red dashed line and includes the labeled counties. Land elevations and water bathymetry are color-coded in the lower right corner.Some of the major towns are indicated and the black zone separating the gray and white map areas is the “fall line” that represents the contact between the Coastal Plain and Piedmont Provinces. 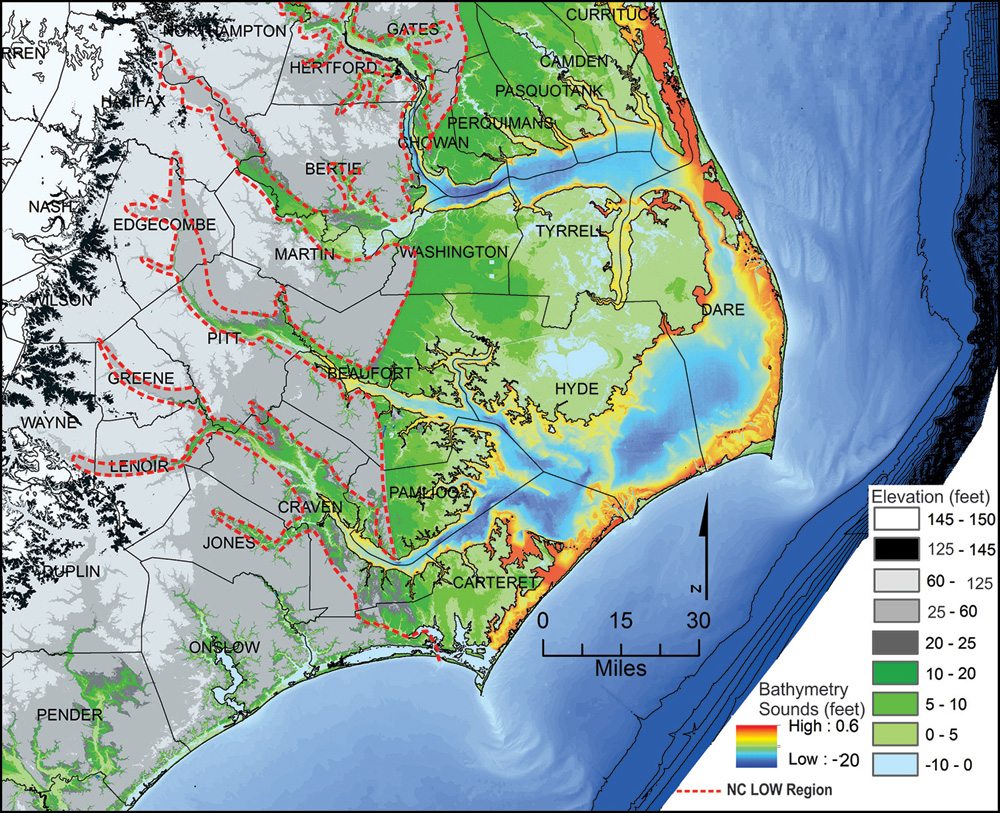 FIGURE 2. This is a color topographic map of the NC LOW coastal system which is outlined by and east of the red dashed line and includes the labeled counties. Land elevations and water bathymetry are color-coded in the lower right corner. The black area separating the gray and white map areas is the “fall line” that represents the contact between the Coastal Plain and Piedmont Provinces.

North Carolina’s coastal heritage is associated with fluctuating climates and the responding changes in sea level, tides, and storms at time scales that range from days to millennia. These climatic oscillations through time produced the surficial features of the modern Coastal Plain including the river systems, associated uplands, and modern coastal system with its estuaries and barrier islands that occur at the land-sea-air interface. This interface is one of the most dynamic and energetic zones of our planet and is constantly being reshaped by the ongoing impacts of changing sea-level and storms.

A line drawn from Raleigh to Cape Lookout divides the North Carolina coastal system into two distinct zones that are different in both their geometry and geologic processes. The southern coastal zone is characterized by a relatively steep sloping land surface compared to the less-steep slope of the northern zone. Rising sea level has flooded these disparate zones, producing different kinds of barrier islands, inlets, and associated estuaries. The steeper slope of the southern zone produces short, stubby barrier islands that hug the mainland shoreline, resulting in narrow back-barrier estuaries connected to the ocean by abundant inlets. The gentle land slope of the northern zone produces long barrier islands that are broken by only a few major inlets and occasional small and ephemeral inlets. The northern barrier islands occur on the seaward side of a broad expanse of drowned-river estuaries of the Albemarle-Pamlico estuarine system, that project seaward into the Atlantic Ocean forming the famous Cape Hatteras and associated Outer Banks. It is the northern coastal zone that constitutes the North Carolina Land of Water (NC LOW) Coastal System as indicated on figure 1.

The NC LOW coastal system is dominated by the following general characteristics:

LOCATION OF THE NORTH CAROLINA LAND OF WATER COASTAL SYSTEM
The “North Carolina Land of Water” (NC LOW) coastal system is bounded on the east by the Outer Banks barrier island sand dam and extends westward through the Inner Banks to the Suffolk Shoreline, an ancient ocean shoreline (figure 2). NC LOW is bounded by the Virginia state line on the north and Beaufort Inlet and Newport River on the south. The Outer Banks are subdivided by Oregon Inlet into the northern urbanized barrier islands (Islands of Opportunity) and the southern islands consisting of a series of eight destination villages separated by segments of natural barrier islands (String of Pearls). The water bodies that occur west of the Outer Banks, are like an open hand with Pamlico Sound representing the palm and the fingers extending westward to form the vast Drowned River Estuarine System: Currituck, Albemarle-Roanoke, Pamlico-Tar, Neuse, and Core-Back sounds. The Down-East Lowlands extend eastward forming the low-elevation land areas between the watery fingers of the Inner Banks.

A Time for Science

NC Partnership for the Sounds